Welcome to the site of the Wave Engineering Laboratory, a part of the Center for Nonlinear Studies in Institute of Cybernetics, Tallinn University of Technology.

The laboratory was formed on 01.01.2009 to promote and provide a structure for research in water waves and coastal engineering within the Department of Mechanics and Applied Mathematics, Institute of Cybernetics and now is one of the core labs of the Institute of Cybernetics. The laboratory currently comprises one leading scientist, one senior scientist, five scientists with PhD and three PhD students.

The team focuses on complex and nonlinear phenomena in wave dynamics and coastal engineering, and the applications of mathematical methods in wave studies. The scope of research involves, but is not limited to, long wave theory and applications (with emphasize on fast-ferry waves, shallow-water solitons, set-up and run-up phenomena, tsunami research, and generic aspects of coastal hazards), surface wave modelling, wave climate studies, and wave-driven phenomena in coastal engineering, with application to integrated coastal zone management. Rapidly emerging new foci are the use of Lagrangian transport of different substances in marine environment for marine and maritime spatial planning, adequate description of hydrodynamic (wave and water level) extremes, and preventive methods for mitigation of marine-induced hazards.

Tarmo Soomere was elected foreign member of the Lithuanian Academy of Sciences  (01.10.2019).

The Estonian Academy of Sciences has re-elected Tarmo Soomere to be the President of the Academy for the next five years (25.09.2019).

Tarmo Soomere received the title of The Friend of Press in 2017 from the Estonian Newspaper Association (Eesti Ajalehtede Liit, 06.12.2017) and was selected as the fifth most distinguished person in Estonia in 2017 by columnists of the major daily newspaper Postimees (The Postman, 30.12.2017)

Andrea Giudici was one of the 8 selected winners of the “Teadus 3 minutiga” (science in 3 minutes) competition on 27.10.2017

Tarmo Soomere was elected foreign member of the Latvian Academy of Sciences  (26.12.2015) and honorary member of the Estonian Scientific Society in Sweden (09.02.2017).

Andrea Giudici presented his idea “Floud, a cloud-based flood monitoring system” at the Tehno Hack 2015 and his team won the special prize from Arrow Electronics Estonia (a photo from the event).

Bert Viikmäe was awarded a Young Scientist Scholarship by the Estonian Academy of Sciences’ Foundation (14.12.2014).

The Estonian Academy of Sciences has elected Tarmo Soomere to be the President of the Academy for the next five years (15.10.2014).

Andrea Giudici received the best students’ presentation award from the 2nd International Conference Climate Change – The environmental and socio–economic response in the southern Baltic region (Szczecin, Poland, 12–15 May 2014) for his presentation Highly persisting patch formation areas in the Gulf of Finland, the Baltic Sea.

Tarmo Soomere was awarded a 2013 National Science Award in engineering sciences for his work “Quantification and mitigation of marine coastal hazards in the Baltic Sea basin”.

Medal of the Baltic Academies of Sciences was awarded to Tarmo Soomere for outstanding results in research cooperation between Estonia, Latvia and Lithuania in marine sciences (29 January 2013, the medal).

Tarmo Soomere has been elected the Scientist of the Year (2011) of the Tallinn University of Technology (January 2012).

Tarmo Soomere received the title of the best scientist, journalist or teacher that communicates science and technology in Estonia (2011).

Ira Didenkulova has been elected the Best Young Researcher of the Year (2010) of the Tallinn University of Technology.

Ira Didenkulova has been awarded the Plinius Medal by the European Geosciences Union (2010).

EGU Awards and Medals during the 2010 General Assembly 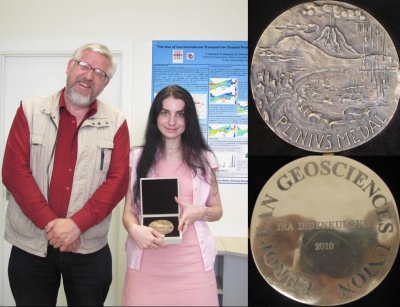 Estonian Society for Nature Protection (Eesti Looduskaitse Selts) issued a thanksgiving letter to Tarmo Soomere for informing the public and leaders of Estonia, and for ravishing them to protect the Baltic Sea (21.12.2009)

Master thesis of Inga Zaitseva-Pärnaste “Long-term variations of wave fields in the Estonian coastal waters” (June 2009) won the II prize of the national competition of student’s scientific work by the Estonian Academy of Sciences (2009).

A selection of key events

Month of French Science in Estonia (2011)

Baltic Sea as a Bridge

The research in laboratory is also financed by