The BalticWay team organised the international summer school “Preventive methods for coastal protection” jointly with the Geophysical Sciences department of Klaipeda University in Klaipeda on 18–20 September 2011. The school was dedicated to novel methods for coastal protection and maritime spatial planning developed within the BalticWay project. The focus was on techniques that use the intrinsic dynamics of ocean currents for the management of environmental risks in the context of the ever increasing human impact on various vulnerable sea areas. Particular treatment was given to the risks associated with potential oil pollution from ship traffic or oil platforms. The ever increasing potential of such risks calls for out-of-the box thinking towards safe management of the maritime activities and mitigating the impact of the associated risks on vulnerable areas.

The technology responding to these risks and developed by the Baltic Way team binds together a 3D ocean model, calculations of a large set of Lagrangian trajectories of water particles, statistical analysis of the properties of these trajectories and, finally, methods for construction of the optimal fairway. The school presented an overview of the entire technology, from the basics of physical oceanography and circulation modelling and up the methods for quantification of offshore areas in terms of their ability to create danger to the vulnerable regions and practical procedures for the construction optimal fairways in terms of environmental risks. 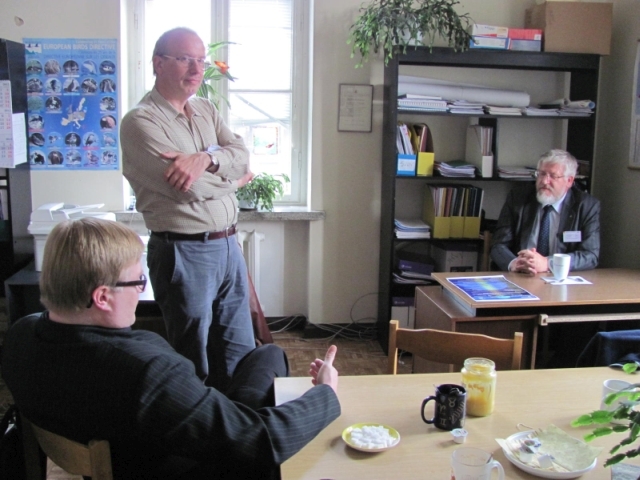 Several guest lectures on the principles of computational geophysical fluid dynamics and on modelling of processes in the nearshore were given by experts from Institute of Cybernetics at Tallinn University of Technology (T. Torsvik) and from Russian State Hydrometeorological University, St. Petersburg (T. Eremina). The participants and the lecturers represented 13 countries; additionally to all nine Baltic Sea countries also Norway, Italy, Spain, China were represented.

The material of the first day largely followed the theoretical background necessary for the smart use of currents in environmentally safer management of the Baltic Sea maritime industry. Kai Myrberg (Helsinki) portrayed the main features of the physical oceanography of the Baltic Sea and depicted the largest challenges of marine science to understand and protect this vulnerable environment. Tarmo Soomere (Tallinn) gave short inside into the basic concepts and equations of hydrodynamics in continuous medium. Tomas Torsvik (Bergen/Tallinn) started from a detailed description of techniques of discretisation of partial differential equations and switched then to a hands-on training session, and finally gave an overview about the widely used large-scale ocean models. 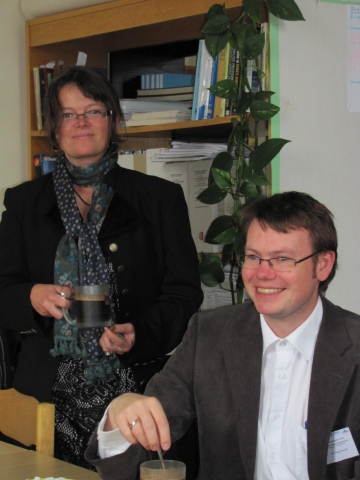 The second day was open by the lecture by Tatyana Eremina (St. Petersburg) about basic aspects of modelling of transport of pollutants in the marine environment. Kristofer Döös (Stockholm) continued this topic towards a description of the possibilities of modelling of Lagrangian transport using the TRACMASS code, mostly developed by him. Ewald Quak (Tallinn) presented several examples of pitfalls of irresponsible use of different numerical methods. Unfortunately, the Vice-Rector of the Klaipeda University Prof. Alfonsas Ramonas was not able to welcome the participants. His lecture was replaced by another hands-on training session by Tomas Torsvik (Bergen/Tallinn) and by a shorter overview of Klaipeda University by the local hosts Inga Dailidiene and Loreta Kelpšaite. After lunch, Tarmo Soomere (Tallinn) presented an insight into the basic steps of the Baltic Way technology for coastal protection. Jens Murawsky (Copenhagen) introduced the students to the art of oil spill modelling and described the outcome of a study of the relative importance of wind- and wave-induced drift on the results of the BalticWay technology. The evening session contained seven studentsâ€™ presentations.

The final day started by a lecture of Kristofer Döös about recent experiments with surface drifters in the Baltic Sea. Jens Murawsky gave a detailed overview about principle, tasks, organisation and modelling equipment of operational oceanography services in Denmark. Probably one of the most popular lectures of the entire event was presented by Ewald Quak just before the lunch about the basics of EU financing. The event was closed by the overview of Tarmo Soomere about developed applications of the BalticWay technology and about future research challenges in order to implement this technique for preventive coastal pollution in other domains of the World Ocean.